Admit it. Traveling is costly. From plane fares, land travel expenses, boat rentals to entrance and environmental fees. Name it. Free lunch does not really exist when you travel. Been there done that. Fortunately, I found a job (as an AGRICULTURIST) that allowed me to go to 9 beautiful provinces in the Philippines for FREE. Here are those places:

The province is the largest in Luzon and one of the top producing regions of corn in the Philippines . It is 7-10 hours away from the metro. Land trip could be tiring but you can opt to ride a plane.

Would you believe that I was striking a pose on this hilly land planted with corn? Yep! At the back are corn plants nearing maturity.

What to expect: Large land areas planted with corn. Farmers usually plant hybrid corn, and they are sooo pretty they look like Bermuda grass from afar. Pansit dishes are a must try food here – do not forget to have a taste of pansit Cabagan and batil patung.

A landlocked province of the Philippines at the southern tip of the Cordillera Administrative Region. Its huge production of vegetables makes it known as the Salad Bowl of the Philippines. I super duper love the cold weather here!

Who loves strawberry? I know you’ve tried strawberry picking and strawberry taho but have you tried extracting strawberry DNA using household materials? I did and it was dope!

What to expect: This place is a haven for frugal vegetarians. Due to its favourable weather condition for vegetables, there is abundant supply and therefore the price is relatively cheaper than in any supermarkets in Manila. Try to locate the public market in front of Benguet State University and you can get even more discounted veggies.

You probably had seen this view in one of your textbooks but seeing Mayon volcano live will leave you in awe. Albay is a province composed of 15 towns and 3 cities. It is located in south-eastern part of Luzon. This place is worth a visit! *wink*

Pili nuts are famous as pasalubong in the province. Have you seen a fresh pili fruit? Imagine earth has core, mantle and crust, pili nuts or the kernels are the core covered with testa then comes the hard shell of it as the mantle and lastly the pulp as its crust. I tried eating boiled pili pulp dipped in salt from an agri fair held at Albay and it looks like it is a common thing.

Cebu city is the oldest and the first capital of the Philippines. The province is located in Central Visayas and has its main island plus 167 islands and islets. Ferdinand Magellan was the first European to come to the Philippines in 1521, he planted a cross to signify an important event about the propagation of the Roman Catholic faith. The cross is now housed in a chapel at Magallanes Street. 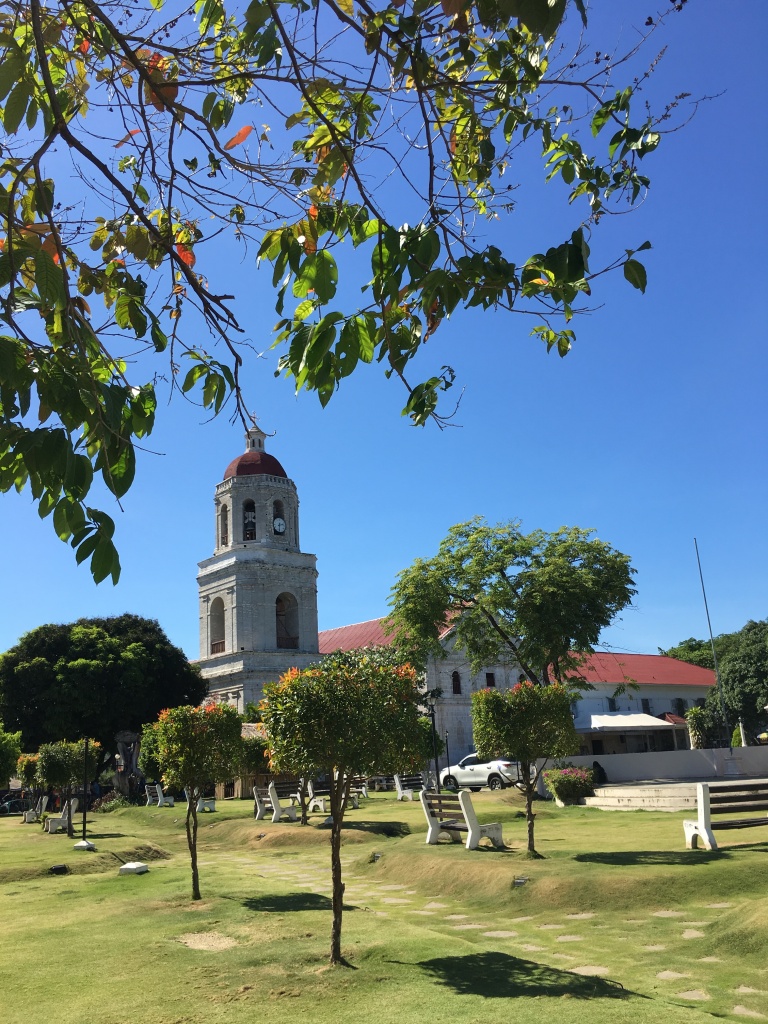 Cebu is also one of the leading corn-producing provinces in the Philippines. Corn milled into grits is a staple common in many households in Cebu. They substitute corn grits to rice. I tried cooking and eating corn grits and true enough, they are the perfect alternative to rice. Eating corn grits make you feel full faster and you won’t easily get hungry relative to rice. Perfect for those people cutting carbs/rice on their diet.

What to expect: Beautiful old churches and beaches you can visit. The city feels like Manila with relatively lesser people and vehicle well I guess because it is the second largest metropolitan area in the Philippines after Manila. Cebu’s dried mango has a distinct taste that will surely leave you craving for more and also let us not forget our dearest lechon. LOL.

Bacolod City or the city of smiles is the capital of the province. Negros Occidental is situated in the region of Western Visayas. It is the fourth largest island in the Philippines and second most populous province in Visayas after Cebu. The people there primarily speak Hiligaynon.

The soil in Negros is basically volcanic making it ideal for agriculture. Around 80% of all arable land is cultivated in the island. If you happen to be sitting on the window seat, take a look outside before the plane lands and you will see large land areas planted with sugarcane which explains why it is known as the “sugarbowl of the Philippines”. Sugar industry is the main contributor to the economy of Negros Occidental producing around half of the country’s sugar.

What to expect: The strong sugar scent coming from sugarcane plantations early in the morning. Soft-spoken people. MassKara Festival every third week of October. Delicacies and pampasalubong with a touch of sugar of course such as piaya, biscocho, and pinasugbo. There are also grilling kiosks and restos everywhere – hello chicken inasal. Seafood is cheap in some areas and the oyster dipped in sinamak (vinegar with lots of spice) is bomb (ok, my mouth is watering rn).

Just like in Negros, people here or the Ilonggos are so malambing when they speak. They use three languages such as Hiligaynon, Kinaray-a and Capiznon. The province is situated in the Western Visayas part of the Philippines and occupies the central and eastern section of Panay island. Iloilo is known for its beautiful old world architecture – Spanish colonial churches are amongst the famous tourist sites.

Iloilo City is the capital of the province and center for business, shopping, education, medical, real estate and many more. Due to its distance from the Visayan Sea, Iloilo has a strong fishing industry and a booming tourism industry. They produce a wide array of agricultural products like rice, corn, banana, pineapple and sugar among others as well as high-end crops.

What to expect: Bodies of water and therefore there is variety of fresh, delicious and cheap seafood. Hot and yummy batchoy which is best paired with pandesal or biscocho. Beautiful old churches. A few minutes boat ride from Jordan Port to Guimaras.

Located in the Zamboanga Peninsula region in Mindanao, Zamboanga del sur covers a total area of 1,737.25 sq mi covering the southern part of the peninsula. The name Zamboanga came from the Malayan word “Jambangan” which means a place of flowers. The first settlers of the area were known as the Subanons or Subanens – meaning “river folks

The province excels in the field of agriculture, mining and fishing with agriculture being the major contributor to the province’s economy. The large agricultural land area of the province comprises of non-forested areas, areas for annual crops, fishponds, perennial crops, and grasslands.

What to expect: Chavacano-speaking people. Cheap imported goods. Stores selling malongs and jewelries. And last but definitely never the least…curacha!!!

Another landlocked province – Bukidnon which means highlander or mountain dweller. This place occupies a wide plateau in the north central part of the island of Mindanao. Southern and eastern boundaries of the province are mountainous area. The picture below shows the Musuan Peak or Mt. Musuan near our field work.

The province is the major producer of rice and corn and therefore it is considered as food basket of the region. There are also products from plantations such as pineapples, bananas and sugarcane. Majority of large firms operate processing and production of the above-mentioned crops. Bukidnon, being landlocked highly depend on nearby cities Cagayan de Oro and Davao for marine products.

What to expect: If you are traveling by land from Cagayan de Oro or Davao airport, buses stop at certain checkpoints – either for livestock quarantine or security purposes. During fruiting season (~September to November), you can enjoy fruits like durian, lanzones, mangosteen, pomelo and marang for a relatively cheaper price.

The province is located in the Soccskargen region in Mindanao. The name Sultan Kudarat came from its Muslim ruler Sultan Muhammad Dipatuan Kudarata who is considered a national hero.

Agriculture is the predominant economy in the province. Some of the crops being cultivated in the province include rice, corn, coconut, mango and banana. Fruits are relatively cheap and fruit stands can easily be spotted on roadsides.

What to expect:  Mountain ranges. Muslim communities. Roundabout with a structure showing a crescent moon and a star (used to symbolise Islam). Despite all the bombing news about the province, I found the place generally peaceful with kind and helpful people.

Given the opportunity to travel for free, which province are you going to visit first?